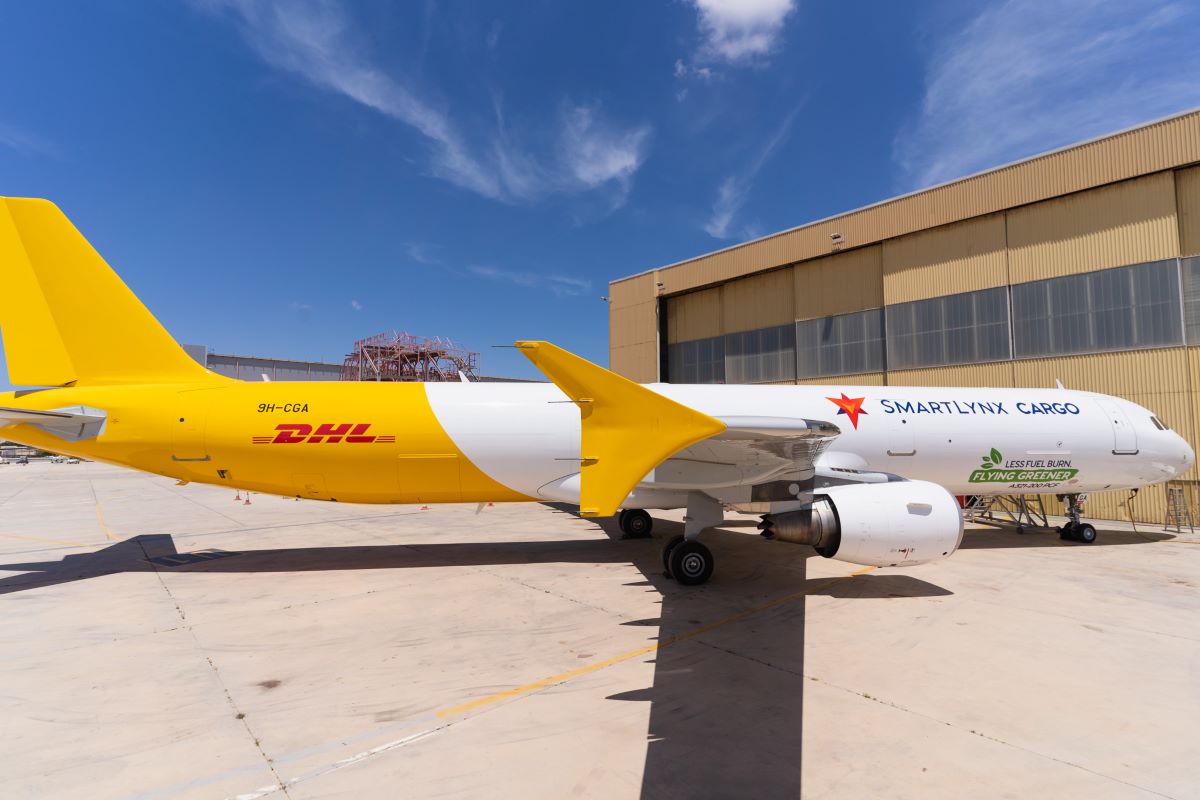 SmartLynx – a family member of the Avia Solutions Group, the largest aviation and aerospace business group operating in Central and Eastern Europe – is also proud of the aircraft’s new livery, specially commissioned to feature both SmartLynx and DHL branding. The new freighter will fly to Leipzig where it will commence operations in support of the Express Division of Deutsche Post’s DHL group. The partnership will further enhance DHL’s unit Co2 emissions by introducing the most fuel-efficient narrow-body aircraft in its class

Compared to similar class freighter models, the A321F is regarded as a better option for the environment and lowering Co2 emissions, with a 20% reduction in fuel burn and its enhanced performance in range, payload, and volume capacity. The aircraft type is also acknowledged as being one of the most technologically advanced narrow-body fleet types in its class.

Through its investment in the introduction of the A321F to the fleet, SmartLynx Malta is visibly demonstrating its commitment to sustainability and a forward-facing focus on a cleaner, more environmentally aware future for air freight transportation.

The introduction and Maltese registration of the new aircraft are regarded as setting new standards for SmartLynx and their progression in the freighter market. The SmartLynx A321F is perfectly placed to meet the ever-increasing demand for express global cargo transportation and comes as confirmation and recognition of the aviation company’s position in support of the freight movement sector. Among SmartLynx’s other main strengths that allow them to bolster their progressive response to the changing face of freight transportation are adaptability, swift response times, and a commitment to safety.

Citing the growing demand for air cargo capacity, Zygimantas Surintas, CEO of SmartLynx Malta says, “The increasing demand for e-commerce shipments, along with the continuous need for the transportation of both protective equipment and medical supplies has vastly dictated the pace of growth right across the air cargo industry. The introduction of our new A321F as the first freighter aircraft registered in Malta will enhance our ability to support our partners in DHL and be well placed to contribute our support for growing air cargo demand in general.”

The CEO went on to add his appreciation for the guidance and assistance of the Maltese authorities, “This advance is a noteworthy step in the right direction and cements our commitment to strategic planning for the future in a cleaner and more environmentally sensitive manner. The advancement comes with our sincere thanks to the Maltese authorities for their cooperation, guidance, and support for this historic project for SmartLynx. In fact, the contribution of every sector of the Maltese authorities can’t be overstated. Without their guidance, assistance, advice, and constant contribution to the entire project, this historic event could not have happened.”

Capt. Charles Pace, Director General for Malta Civil Aviation, stated that the collaboration which started with the setting up of the AOC is now moving forward with these new initiatives. “The growth of SmartLynx Airlines and introduction of new aircraft fills us with courage at a time when the industry has been struggling to cope. CAD is extremely pleased with the response which SmartLynx Airlines has shown during the weeks of work on the project, and look forward to see more aircraft added to the AOC.” Capt. Pace thanked the inspectors who did a very diligent job within the required timelines. He went on to thank the management of SmartLynx Airlines who had faith in the 9H registry and wish them a bright future.

In addition to this quantum leap for SmartLynx Malta, plans are afoot for the introduction of additional A321Fs along with a future target of becoming one of the largest narrow-body cargo freight carriers.