Green Flying: is it possible to implement? 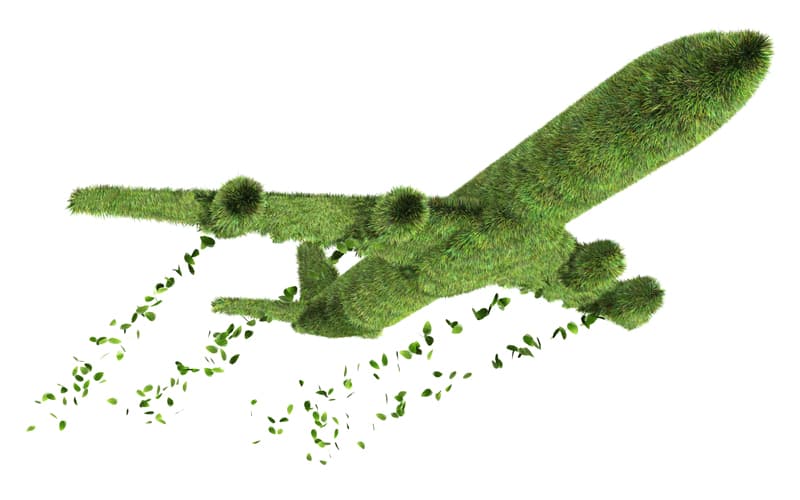 There is no doubt that aviation industry has a great impact on environment. Various Non-governmental organizations (NGO) worldwide are searching for the best ways to solve the issue of rapidly growing carbon dioxide emissions as the number of air passengers exceed every forecast. And not just NGOs, as aircraft manufacturers are carefully designing new engines and other solutions to reduce carbon emissions. However, the movement towards eco-friendly aviation is barely scratching the surface of the issue despite the effort. So, what is happening in the industry towards green flying initiative and what can actually be done on limited resources?

Probably the biggest issue for green flying is the actual flying. People are constantly travelling by plane and it would be extremely difficult to persuade them that any other mean of transportation would be much more environmentally friendly. Mostly, because at this age time is money, and flying saves time. Besides that, travels by aircraft became a lot cheaper, especially with low-cost airlines when tickets for vacation can cost as low as 10 euro per person. However, what is the real cost of so many flights?

According to the International Air Transport Association (IATA), at the moment around 4 billion passenger seats are sold in civilian airliners every year. Meaning that nearly half of our population flies every year. It is predicted that by 2036 the number will double. Every year the number of air passengers grows by 5 percent. The irony – everyone worldwide is talking about carbon emissions and searches for the ways to minimize it but flies more than any year before.

Of course, one might say that aviation is just a very small player in carbon emission environment and it would not be wrong. Only 2 percent of global carbon emissions belong to aviation industry, however these 2 percent convert to 859 million tons, which still is a great issue in the worldwide context.

What are the solutions?

Some of the solutions to this ongoing and still rising issue are obvious. We should stop flying so frequently. But is it really a solution? Aircraft manufacturers are working daily to create engines that would use less aviation fuel and would be more efficient. However, knowing the aircraft fleet worldwide is not changing as soon as the new aircraft engines being released, these changes would not be implemented soon enough.

The other solution is to adapt current aircraft for biofuel. Some airlines are already flying with biofuel. In the past decade, aircraft are allowed to run with synthetic kerosene. ASTM International, the organization that sets standards on jet fuel, allowed having up to 50 percent of biofuel in jet tanks and by this day we already had around 143 thousand such flights. Yet again, this is an extremely small amount of scheduled flights as only in 2018 there were 39 million of them. There is also another issue being raised – if biofuel will be used, will there be an issue for food growing and using it for fuel rather than feeding people worldwide.

The most interesting suggestion is to use electricity instead of fuel. This solution is yet to be developed and is not used commonly at the moment. Only several test flight were done and most of them were on extremely small aircraft. Of course, using renewables are very appealing but the result at the moment is not satisfactory at all.

What else can be done?

It is really hard to say, what could be the universal truth for this rising issue. The development of new technologies will eventually serve to the purpose but at this time, it is best to adapt the older fleet to timely standards. The best way to do so is by upgrading the aircraft with spare parts that would help to minimize the consumption of jet fuel even in theoretical level. The reason behind this is that the fleet are not changing fast enough to be up to date with environmental standards and maybe even the smallest adaptations of the aircraft or its engines, while working hand-in-hand with manufacturers and standardization organizations would benefit to the cause.

“We understand that aviation industry is changing very slowly. It is enormous and even the slightest changes to the aircraft means a lot of finance. However, we must be flexible and responsible. There are many various regulations and new standards being developed every day. Even the smallest changes in the aircraft, physical or IT solutions, might change the efficiency of the aircraft and every player in the market should be willing to make their fleet as green as possible,” says Dainius Meilunas, CEO at Locatory.com, an aviation IT company, primarily acting as an aircraft parts locator.

Prev article
Next article
Latest news
2022-09-28
How dependent is tourism industry on private jets?
2022-09-28
FL Technics launched a line maintenance operations in Abu Dhabi
2022-09-27
Why using a certified engine stand can save you thousands
2022-09-27
Sensus Aero presents next-gen aviation training technology based on virtual reality
2022-09-22
Chairman of the Board Of Avia Solutions Group Gediminas Ziemelis: With 30% of airlines’ costs accounting for jet fuel, fuel price spikes pose a risk of crisis in aviation – Big Data and AI could help reduce consumption and CO2 emissions by 2-5%