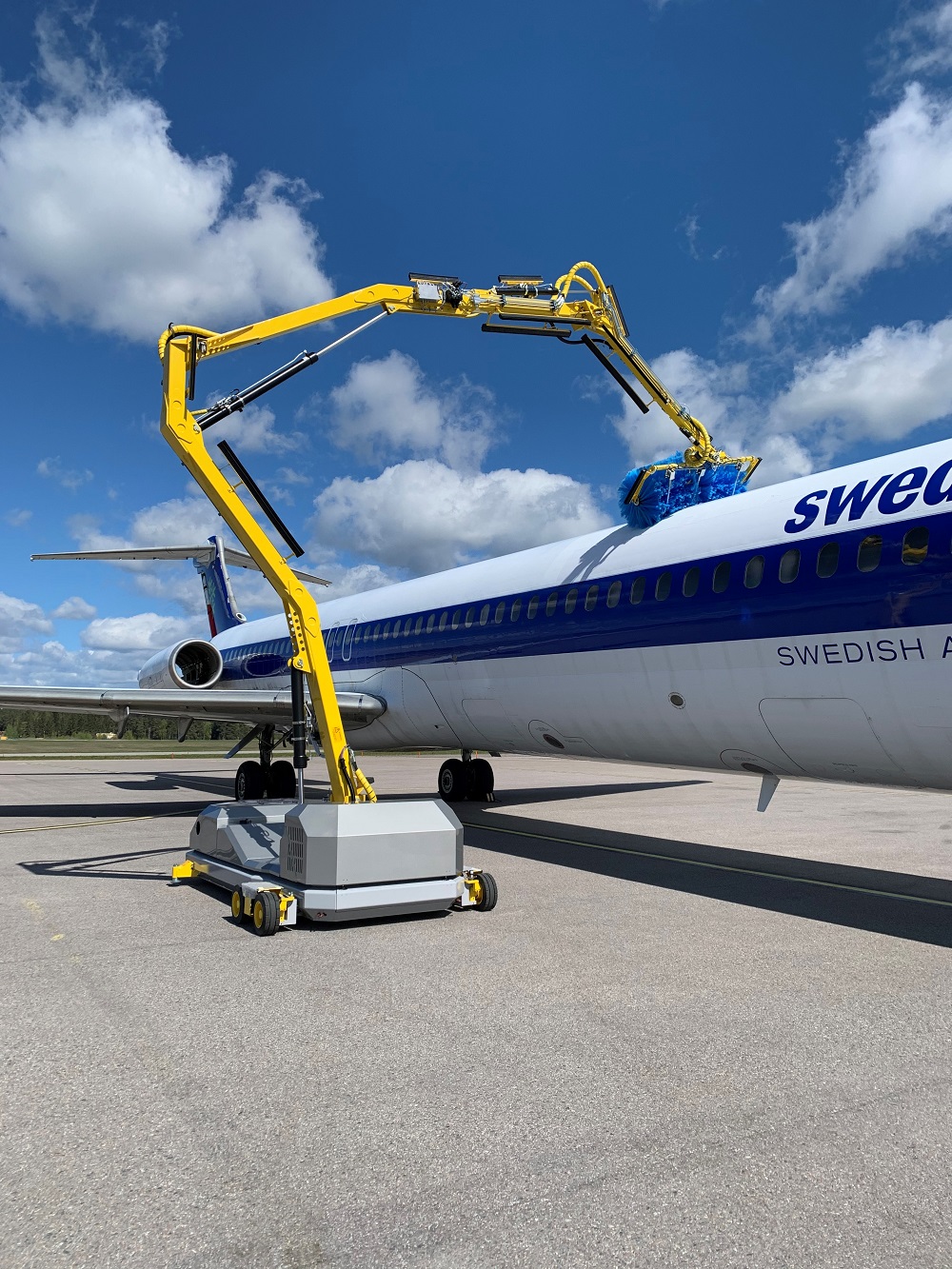 Manufacturers recommend that their aircraft should be repainted every 5 to 7 years. In reality, and due to the expense involved, some airlines and aircraft operators try to hold out for as long as 10 years, a practice which is made possible by regular aircraft washing. Some aircraft are repainted more often to maintain the airline’s aesthetic image or to facilitate the introduction of a new image, a new sponsorship, or a new livery design.

The main reason behind the need for aircraft repainting is to reduce the degradation of the aircraft’s surface and to reduce drag caused by the build-up of contaminants that lower the aircraft’s efficiency and increase its fuel burn.

Anything that adds cost to an aircraft’s viable operations needs to be addressed as quickly as possible, and that’s where regular aircraft washing comes in.

According to Jan Brunstedt, the CEO of Aviator Robotics AB, the designers and manufacturers of Nordic Dino – an advanced semi-automated aircraft exterior cleaning technology – and a family member of Avia Solutions Group, “The frequent washing of an aircraft, up to 6 times per year, can extend its paint-life by 2 to 3 years and significantly reduce its operating costs. Additionally, frequent washing can help in the detection of early signs of corrosion and help reduce the need for expensive maintenance.”

Aircraft painting is a complicated, costly, and time-consuming process. A large passenger or cargo jet can take 8 take 10 people working around the clock, using anything between 70 and 950 gallons of paint, and a drying time of anything from 12 hours to one week for the job to be completed.

In most cases, rather than stripping the aircraft’s surface back to its original metal using chemical ‘strippers’ that are not environmentally friendly, aircraft finishing companies use a technique called abrading – similar to a sanding process – before the task of repainting can commence.

At a cost of up to $200,000 to completely repaint an aircraft, taking steps to reduce the need for frequent repainting can be the difference between profit and loss for many airlines and aircraft operators.

For military aircraft, coated using a non-radar-reflecting paint and operating in desert areas, regular cleaning is essential, as contamination by sand can reduce the effectiveness of the aircraft’s special ‘cloaking’. While there is little public evidence to support the qualities of this super material, it can be assumed that aircraft washing is the most effective means of keeping the aircraft’s special properties operational and effective.

For business jets and private aircraft, a more common paint finish is clear-coating, a finish that delivers a glossy sheen and sparkling lustre to the aircraft’s exterior surface. Along with being an aesthetic addition much in demand by high-net-worth individuals and private charter companies, clear-coating reduces drag, increases efficiency, and reduces expense.

Again, according to Brunstedt, “To operate aircraft to their full capabilities, and reduce additional spend, regular cleaning of the aircraft’s exterior is a vital weapon in the armoury of commercial airlines and private operators. Our Nordic Dino aircraft exterior cleaning technology can play a vital role in increasing the time frame between aircraft repainting cycles and significantly reducing operational costs. Additionally,” says the CEO, “regular aircraft cleaning, along with enhancing the aircraft’s looks, can lead to the detection of corrosion, paint flaking, scratches and dents, and other signs of possible damage. Aircraft maintenance is an expensive process but one that can be reduced through a regular, and thorough washing. It is commonly agreed across the aviation industry that a newly cleaned aircraft can generate savings of approximately 0.5%.”