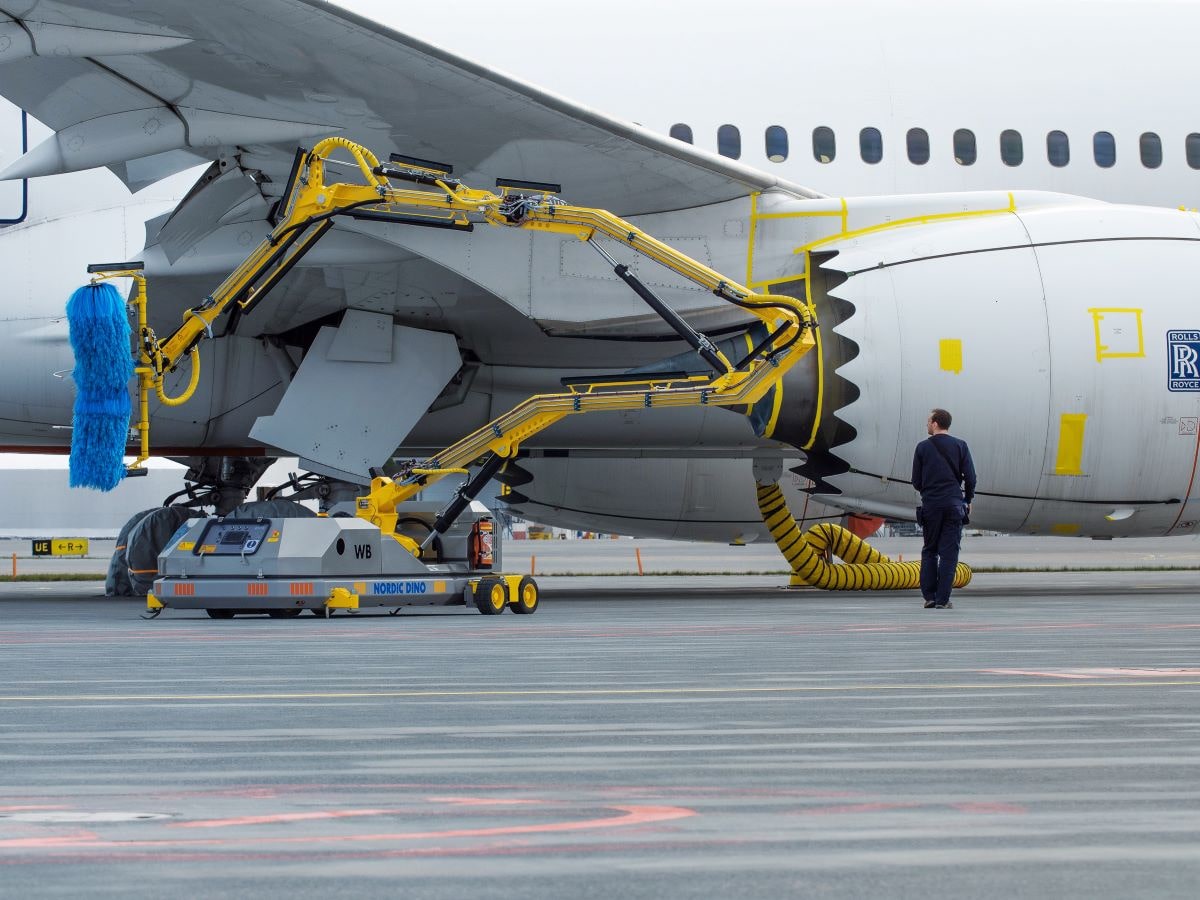 It’s a question that may be as old as powered flight itself, but the conversation continues to this day – what is the aerodynamic effect of dirt on an aircraft, and how does a clean aircraft generate greater fuel savings?

Jan Brunstedt, the CEO of Aviator Robotics AB, the designers and manufacturers of Nordic Dino – an advanced semi-automated aircraft exterior cleaning technology – and a family member of Avia Solutions Group, says “the results are already there to be seen for themselves when it comes to fuel savings generated with the assistance of clean aircraft.

“While the science behind the measurement of savings may be somewhat vague, there can be no doubt that a newly cleaned aircraft can generate what is commonly regarded in the industry as a saving of approximately 0.5%.”

To illustrate the point, the CEO cites tests conducted in the 1990s on a McDonnell Douglas MD-80 aircraft. In the controlled tests, a ninety-minute flight was conducted on an aircraft that had only been given a primer coating to its exterior. Its fuel consumption was then measured. The aircraft was then painted and a flight matching the parameters of the first was once again conducted and the fuel consumption was again measured. The result showed that the newly painted aircraft consumed 1.5% less fuel than the primed aircraft.

While a newly painted aircraft does not exactly equate with a newly cleaned aircraft – other factors will come into play – the evidence stacks up firmly in favour of a clean aircraft’s greater fuel efficiency.

To further illustrate the point, Brunstedt cites yet another case from the late 1990s. “Two B747s of the same age flew between Amsterdam and New York, one aircraft had been recently cleaned, with the other due for cleaning the following week. The clean aircraft made a fuel saving of half-a-ton – or 0.5% - over the uncleaned aircraft on the same transatlantic flight route.”

In normal flying conditions, aircraft exteriors gather dirt, but aircraft operating in some specific geographic locations can result in greater dirt accumulation than others, and therefore require more frequent cleaning.

In the northern hemisphere, and particularly in locations where harsher winters are experienced annually, aircraft tend to gather more exterior dirt due to the residue from constant de-icing, sand throw-up from aircraft ramp taxi areas, and the use of de-icer on runways. The cumulative effect of these particular conditions can lead to significant dirt build-up, especially on an aircraft’s lower belly and will require more frequent cleaning.

In many geographic regions, mosquitoes can be a major problem for aviation, with insect detritus forming extensive build-ups on aircraft exteriors, most especially on the leading edges of the aircraft’s wings. Without regular washing solutions being employed, these build ups can require aircraft to generate greater thrust – and greater fuel usage – during take-off, especially when carrying full loads. Adding further evidence to the importance of proper and regular exterior cleaning routines.

While new technologies may influence reduced fuel consumption, exterior cleaning will remain a necessary aspect in the safe and efficient operation of aircraft.

In a recent development, one international company involved in the aviation industry has developed an aerodynamically efficient film – called sharkskin – which is used to coat an aircraft’s leading edges, stabilisers, and fins.

In tests involving a Boeing 747-400, sharkskin technology has already demonstrated positive results. Using dedicated fuel analytics to measure any variations in fuel consumption, pre-and post-modification, the application of the technology showed a 0.8% reduction in friction. In real terms, this reduction could account for an annual fuel saving of approximately 300 metric tons and a saving of more than 900 metric tons of CO2 emissions. Despite this increased efficiency, the advanced new material still requires regular cleaning to ensure the maintenance of that efficiency.

“In the future, there will be many advances towards greater fuel efficiency in the aviation industry,” says, Brunstedt, the Aviator Robotics AB, CEO, “however, semi-automated robotic aircraft cleaning solutions, such as is evidenced by our Nordic Dino range, will work hand-in-hand with any innovations that may come on stream.